Despite some recent setbacks another milestone has come to a close in exactly one year after previous one. There are slightly fewer new game features but a number of features got fully functional (instead of being stubbed) and under the hood there are lot of improvements.

Nailing down a thing

Real life has been really busy past few months and I've been tackling very nasty issue in the Stareater so that's why there has been such long time from last update. The project is still going and version 0.8 will soon be published. The nastiness of rendering text is finished (for now) but the real life will remain busy so "soon" will be probably somewhere this month.
Objavio/la Ivan Kravarscan u 15:30 Nema komentara:

A long awaited tooltips are here, you can finally find out what is what and fleets can now find shortest path on their own.

Tooltips look small on the screen and trivial to the player but that simplicity hides quite a lot of complexity under the hood. First of all positioning a tooltip is mildly complex, it is tied to both mouse position and originating GUI component placement, it must be moved horizontally in order to not be clipped by the edges of a window and moved below a cursor if it wouldn't fit above. That two dimenstions but there is a matter of depth, tooltips should be above regular UI components and not block mouse events on them. I went a step further with this one to lay the groundwork for pop-up windows so this is more complex than it need to be for now. And then there is the time dimension, a tooltip appears after a small delay but not if a mouse has moved away in the mean time. All four dimensions are simple to moderately complex on their own and look trivial to a user but they have to work in tandem without hiccup and that's where true complexity arises and where a robust GUI framework pays off.

For now tooltips can be added only to in-engine GUI elements so old WinForms that sorely need explanation can't benefit from them. But that will eventually be solved through ongoing process of conversion to new GUI framework. On top of that I'm trying to work out something better for text rendering. As you can see on the image above, it is not very sharp and there are some stray dots. I'm prototyping SDF based solution for half a year already but it still needs more time in the oven. Naive approach is not very practical and doesn't produce very good results, more advanced approach that promises awesome results takes time to implement, mainly due to how uncooperative (and archaic) font manipulation in standard .Net is. I've only recently solved the hurdle of getting a list of lines and curves out of letters so I can proceed with porting aforementioned advanced SDF method from C to C# but it has also opened a new avenue to explore. I can make a somewhat simpler method that sacrifices the quality of result for a speed of prototyping. In any case I hope to sort out text rendering before the summer vacation. 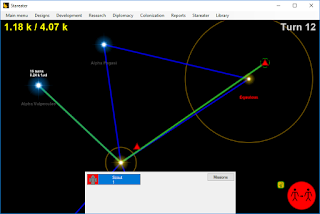 Ship pathfinding is another big feature in this version, allowing your fleets to automatically pick the quickest path over the starlane network. This greatly helps colony ships and other population transporters that are by default automated. Previously they'd just plot a direct course to a destination and in early game that could result in 200 turn journey unless a player didn't override the route. This feature doesn't necessarily limit the movement to the starlane network because starlanes add to the speed rather than multiply it, much like a conveyor belt. When you get to faster star drives pathfinding will likely give you a path that is partially or wholly off lane and there is a way (ctrl+click) to force direct flight anyway.

Here I took some time to refactor transport automation code and and some parts of fleet command code. Previously automation code was quite messy to read, figure out what is going on and where and why it's not working properly. Now it's one third shorter and ten times more readable. There are still some issue but they will be much easier to correct then with the old code.

And finally there are three more small changes made in this version: biology is merged with chemistry, fuel production is increased and ships can be sent even if you don't produce enough fuel. While testing transport automation I've found fuel mechanic to be too restrictive, it is supposed to prevent you from sending a large fleets deep into enemy territory, not to prevent you from colonizing neighboring star. So now you can freely send a fleet on the long journey if you are OK with economic penalty instead of outright being blocked from doing that. Base fuel production is increased 2.5 times and I'm inclined to increase it further so a homeworld could support at least a few colonization fleets for free but I'll will wait for now to see how that will mesh with technology balance. Speaking of which I found it hard to come up with 24 (8 tiers, up to 3 items each) biology technologies that are distinct enough and since chemistry was a bit sparse too, I've decided to merge the two. This unfortunately means removal of UKSA, an organization specialized in biology.
Objavio/la Ivan Kravarscan u 15:17 Nema komentara:

Stareater map generator works in three phases: star placement, wormhole placement and filling up star system. Until now only first two phases were implemented while the final one was a stub (minimal implementation to keep systems non-empty). Implementation of the final phase brought with it more goodies in areas outside map generator. Planet and star traits are reworked, internally they are now two different things, planet traits are dead simple (a planet either has or doesn't have certain trait) while star traits have complex behaviors like temporary duration and the ability to place and remove traits from planets. There are a lot also more planet traits now: toxic (less food), radioactive, three levels of irradiated, two for atmosphere, two for magnetosphere (reduces radiation level), three for gravity, three for mineral abundance and two for temperature. All of them implemented and working. You can even get greenhouse effect if a planet has dense atmosphere and host star radiation level increases. 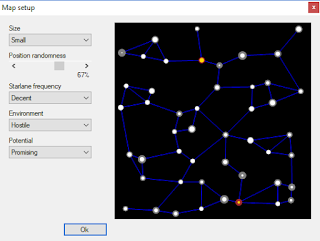 New year brings new Stareater release. There are a few but big changes this time around.

Also I owe you progress report from the last release. I thought about writing in-depth post detailing how drawing scanner range circles works first but now I don't think I'll be done with it any time soon. New stuff in v0.7.1:

Another big milestone came to a close. Thanks to the effort in last milestone this one has considerably more new features and content.

Major features of the milestone:

Minor features of the milestone:

Under the hood changes:

Welcome migrants to more desirable world of tier 3 animations. I think I got it all in one sentence.

In the last release animations were introduced but nothing new was done with them, only existing animations got rewritten. Now that foundation is used to create whole new intro animation when the game program is started.


Interesting thing about how it works under the hood is that specifying when and what happens with animation eerily looks like electric circuit schema. There are resistors (delays), parallel and series circuits, only batteries are missing. Here is a bit exaggerated figure (in reality parallel and series circuits are not physically connected but series "resistor" is big enough to simulate the effect):

One more feature from old CroVar version returned: interplanetary migration. Population from more populated worlds would move to less populated ones inside a star system. This is combined with planet desirability score. For now it's just a function of current and maximum population (less crowded is better) but when I implement more functions for formulas I'll add planet traits and technologies to influence it. I'm eagerly looking forward to a day when tooltips get implemented so I can show you how underlying "spreadsheet" works.

And as usual content update for release is 3rd tier of technologies. This bring along some new ship components, updated calculation formulas and brand new colony construction project: soil enrichment. Upon completion it gives a planet the "fertile" trait which is a new thing buildings can do now.
Objavio/la Ivan Kravarscan u 14:03 Nema komentara: